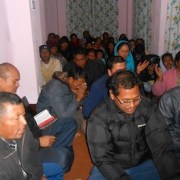 The Lord granted me the opportunity of doing my fourth Training and Ministry Program in Nepal in February 2018.